Welcome to visahub a immigration company 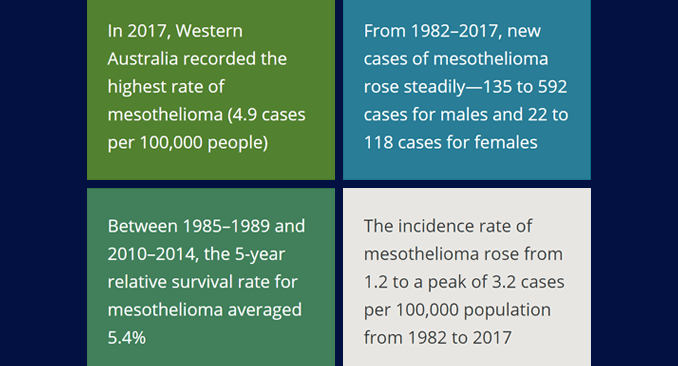 While these results are just indicative, maybe in WA, where we have the highest rates of mesothelioma in Australia, our 36 years of screening at our ADSA Advisory Service has assisted with earlier detection of these diseases. We can only hope that our quest for dedicated research funding is urgently met by our political leaders…

Mesothelioma is a rare, aggressive type of cancer with no cure. However, the latest data from the Australian Institute of Health and Welfare (AIHW) suggests survival is improving.

The report, Mesothelioma in Australia 2019, shows that at 1 April 2020, 659 cases of mesothelioma diagnosed in 2019 had been reported to the Australian Mesothelioma Registry, which is managed by the AIHW.

‘Mesothelioma is predominantly caused by exposure to asbestos. Despite all forms of asbestos being banned in Australia from 2004, hundreds of Australians continue to be diagnosed with mesothelioma every year,’ said AIHW spokesperson Mr Justin Harvey.

The death rate from mesothelioma has risen in recent years, from 1.9 deaths per 100,000 people in 2012, to 2.9 per 100,000 in 2019. The increased death rate in 2019 largely reflects changes in historical exposure to asbestos because the disease takes many years to develop and cause symptoms.

‘Due to its aggressive nature, most cases of mesothelioma have a poor prognosis. However, the length of time people usually live after a mesothelioma diagnosis is gradually increasing, which may be due to earlier detection or improved treatment options,’ Mr Harvey said.

Mesothelioma is much more common in men than women, which is likely due to men more commonly working in certain industries—such as construction—where they may have been exposed to asbestos.

It is important to note that, because mesothelioma typically develops a long time after exposure, the cases included in this report are likely related to historical occupational exposure and should not be interpreted as indicative of current risk in workplaces today.

The import and use of asbestos and asbestos-containing products is prohibited in Australia, however a large amount of asbestos still remains in the built environment.